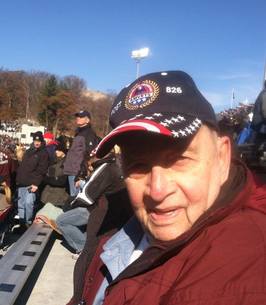 The son of the late Vincent Graziano and Maria (D’Antona) Graziano, Louis was born on November 8, 1929 in Highland Falls, NY.

Louis graduated from Newburgh Free Academy in 1947. He was a retired Mechanic for DuPont Fabrikoid in Newburgh, NY. Louis worked over 15 years at Yellow Freight in Maybrook, NY. Louis honorably and proudly served his country as a member of the U.S. Air Force during the Korean Conflict.

A family statement reads: “Lou was an avid bowler and he used to love racing cars with Speck Sherwood in his youth. He loved small children more than anything. His face would light up whenever he saw a young child. Lou was a big baseball and football fan, rooting on and yelling at the Mets and Giants. Some of Eli’ Manning’s throws would really tick him off.” He will be missed greatly.

Lou came from a big Italian family with his brothers: Charlie, Mike and Jack; and sisters: Angie, Jennie, Rosie, Connie and Mary.

Arrangements are entrusted to Quigley Bros. Funeral Home; to send condolences or to get directions to the funeral home, please go to www.Quigleybros.com.

We encourage you to share any memorable photos or stories about Louis. All tributes placed on and purchased through this memorial website will remain on in perpetuity for future generations.

In memory of my loving brother and Uncle Louie. You were loved well and will be missed greatly.
Mary & Chuck Ledbetter & Lynn - Saturday September 29, 2018 via Donation
To: St. Jude Children's Research Hospital
Share This:

RS
My deepest sympathy and condolences to the Graziano Family, Especially My Uncle Lou and Uncle Dave. My heart and prayers are with you.
A loving Grandpa will be missed.

I'm so sorry for your loss.
Amy Pogue - Saturday September 22, 2018 via Donation
To: St. Jude Children's Research Hospital
Share This:

DY
Our deepest sympathy to the family and especially Edith, his wife who loved him dearly. Lou was a special man and brought a smile to her face. May he rest in peace.
Debbie & Bob Youngberg - Friday September 21, 2018 via Condolence Message
Share This:

LS
A great husband to Edith and for that we are grateful. Rest in Peace.

LJ
Miss you dad my condolences to edith graziano his wife and David Graziano his son , my brother . enjoy all of heavens children comnfort them and give them love
lou graziano jr - Friday September 21, 2018 via Condolence Message
Share This:

In loving memory to a good man, who made my Mom laugh and me smile. Thankful for his life well lived-
Theresa (Paules) Bulger - Tuesday September 18, 2018 via Donation
To: St. Jude Children's Research Hospital
Share This:
1
Page 1 of 1
Share
×