In Memory of
Raymond Russell
Lewis
1926 - 2018
Click above to light a memorial candle.
Memorial Candle Tribute From
Quigley-Sullivan Funeral Home, Inc.
"We are honored to provide this Book of Memories to the family."
View full message >>>
Send Flowers
Menu 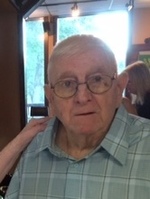 Raymond Russell Lewis originally from Cornwall, NY, passed away on April 8, 2018 after a long illness. He was born on August 3, 1926 to Charles and Marjorie (Malloy) Lewis.

Raymond was a World War II Veteran, serving in the US Navy in Africa and Sicily before working for The Operating Engineers Local 825 until his retirement.

Raymond married Joan Alberta Benker on June 12, 1949. They had almost 50 years of love and devotion until Joan's passing in 1999. He and Joan were the ideal couple full of love, ambition and compassion, helping all they came into contact with. He was a wonderful husband, father, grandfather, brother, uncle and friend to all who knew and loved him. Raymond was a father figure, mentor and rock to so many.

Raymond is survived by his loving sons: Mark (Kathy) and Keith (Bobbie); his 6 grandchildren: Kyle, Brett, Kelly, Mark, Devon and Emmary Lewis. They were the lights of his life and he was theirs. He is also survived by his sister: Carol Morgan; and his niece: Marjorie (Chris) Sherwood who went above and beyond their duties of a sister and niece with their love and devotion to him. Raymond is also survived by many loving relatives and friends, all who thought the world of him. He was predeceased by his sister Jennie and his brother Everett.

Visitation will be held from 4 p.m. to 8 p.m. on Thursday, April 12th at Quigley Bros. Funeral Home, 337 Hudson St. Cornwall-On-Hudson, NY. A Mass of Christian Burial will be held at 10 a.m. on Friday, April 13th at St. Thomas of Canterbury Church, 340 Hudson Street, Cornwall-On-Hudson, NY. Interment with Military Honors will follow at The Cemetery of the Highlands, Highland Mills, NY.

Memorial Contributions in Raymond’s name may be made to The Hudson Valley Honor Flight, PO Box 375, Walden, NY 12586.