In Memory of
Ronald Lawrence
Regan
1946 - 2018
Click above to light a memorial candle.
Memorial Candle Tribute From
Quigley-Sullivan Funeral Home, Inc.
"We are honored to provide this Book of Memories to the family."
View full message >>>
Send Flowers
Menu 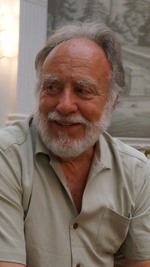 The second of nine children born in Queens, New York Ron left this world at home surrounded by his loving family. He graduated from St. John's University in 1968 with a B.S. in Mathematics. As a member of the crew team he was recruited to row at an Olympic level, however, life had other plans. He became a devoted family man and successful businessman, retiring as Vice President of Information Services at Ottaway Newspapers.

Ron was passionate about renovating his Victorian home, riding his classic yellow John Deere tractor, spending time by the water, sketching, archery and traveling with his family along the east coast and abroad. Ron loved feeling the wind in his face while driving his 1952 Jaguar XJ6 convertible as a member of the Brits of the Hudson Club.

Because of his name, people always quipped about meeting the President; he was also known for his signature beard. We hope to honor his kind, humble nature, understated strength, thoughtfulness, dedication to his family, inquisitiveness, silly sense of humor, love of outdoors and creative holiday scavenger hunts.

Special thanks to Dr. Andrew Chi, his team at NYU and to Hospice who supported Ron’s remarkable bravery, strength and resilience. We are forever grateful to Ron’s Hospice nurses, Diedra Maldonado and Megan Schreiner, a dear friend and neighbor, who went above and beyond in our hour of need. In lieu of flowers, contributions may be made to Hospice of Orange and Sullivan Counties, Inc.

Please join us for a celebration of Ron’s life on Sunday, February 18th from 1-4pm at the family home located on Pleasant Hill Road, Mountainville.