We're sorry but the candle you have selected is currenty in the process of being purchased or has just recently been purchased.

Please feel free to select another candle or check back in 15 minutes to see if the candle you have selected has been released for purchase.

We're sorry but there are no candles available for lighting.

You have already begun a candle purchase session. If you would like to continue with your current candle choice please click "Continue" otherwise please click "Select Another".

The lighting of a Memorial Candle not only provides a gesture of sympathy and support to the immediate family during their time of need but also provides the gift of extending the Book of Memories for future generations.

Obituary for John A. ""Jack"" Thompson 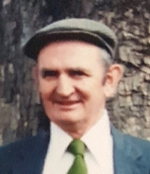 John Augustine Thompson (91), known to family and friends as Jack, passed away in Cortlandt Manor on January 18. He was predeceased by his wife of 51 years, Jean (Starratt) Thompson in 2004, and his daughter, Eileen (Thompson) Sechrist, in 2015. He is survived by his sons, Sean and Patrick, and his daughters, Mary and Ann. He also leaves behind 8 grandchildren and 2 great-grandchildren.

Born in Limerick, Ireland, he immigrated to the United States in 1949. Jack worked for 35 years as Manager of White Plains Animal Hospital. He was a past member of the Ancient Order of Hibernians, and the Elks. Jack was also an active parishioner of Our Lady of Sorrows Church in Vestal, as an usher for over 25 years.

This Book of Memories brings those affected by loss together by encouraging communication and self-expression. By giving friends and family a special place to tell their stories and express their feelings of loss, it helps them care for one another during a very difficult time. Click on any of the links to the right to access features or information within this memorial website.